You are here: Home / Learning / Power Factor: Understanding the Difference Between DPF vs TPF

Power Factor:  Understanding the Difference Between DPF and TPF 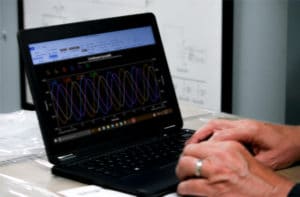 People often refer to power factor without understanding that there are two different power factor measurement types and that it is important to understand the difference between them.
If you have a power factor “problem,” it may mean that you have:

But how do you know which problem you have? And how do you measure it?

What is Displacement Power Factor (DPF)?

DPF is what most people are thinking about when they talk of power factor.  For those comfortable with the math, it is the cosine of the angle between a driving voltage and the resulting current.  For the rest of us, it is a measure of how much the driven current waveform trails the driving voltage waveform.  It turns out that a few degrees of current phase lag makes very little difference in the power consumed, but as that lag increases, it has an increasing effect on lowering the power of the system.  It turns out that the relationship between increasing phase lag and the resulting lowered power is exactly expressed by the cosine of the lag angle.  Therefore, rather than reporting the lag angle, we usually report the cosine of the lag angle.  That gives a more meaningful understanding of whether you have a “displacement” problem or not.

For this reason, rather than reporting the lag angle, we usually report the cosine of the lag angle.  That gives a more meaningful understanding of whether you have a phase angle “displacement” problem or not.  In a system where there are no harmonics present, the true power will be equal to the apparent power (the V x A) times the DPF:

What is True Power Factor (TPF)?

TPF is what most people are actually measuring.  It is simply the ratio of true power (KW) to the apparent power (KVA).

TPF = W / VA  (whether harmonics are present or not)

It’s easy to measure, and traditionally it is equal to the DPF (the cosine of the phase angle).  If your TPF is low, you have a problem.  The only question is whether the problem is due to current displacement or due to a combination of harmonic distortion and displacement.

Why You Care About DPF

If the DPF is low, then it takes more current to supply the same amount of power to a load.  We typically see this with motors, which are traditionally highly inductive loads.  Inductance causes the current to lag the voltage.

Here is an example of how this plays out.  Suppose a single phase motor that is running off 120V needs 1200W to run efficiently.  If there is no phase lag, then the lag angle = 0 degrees.  The cosine of 0 degrees is 1 and the required current draw will be:

Now suppose that the motor has a very large inductance and as a result, the phase lag angle is 60 degrees.  The cosine of 60 degrees is 0.5, resulting in a current draw of

The required current for the same amount of work has doubled because of the increased phase lag.

Below are PSM-A waveform captures that illustrate what was just described.  The first circuit and the circuit below it are consuming nearly the same power, but the top one has a large phase lag of 60 degrees, resulting in a drop in DPF:

The circuit below it has no phase lag, resulting in

A single load with low DPF is usually not an important thing, but what if there are 1000 such motors?  Now the utility needs to supply twice the current to accomplish the same amount of work as if there was no phase lag.  The user doesn’t mind, because in most cases, they are paying for true power (KW) not the apparent power (KVA).  The utility is unhappy because now their distribution system is carrying twice the current that is actually needed to perform the work for the customer.  That extra current results in twice the resistive power loss in their distribution system, which benefits no one.  A similar problem arises for the end user if:

Why You Care About TPF

First of all, TPF is often nearly equal to DPF, so if you care about DPF, you probably care about TPF.  The two measurements deviate from each other when harmonics are present.  In the modern era of non-linear loads and electronic power supplies, there can be significant harmonics present.  If the harmonic currents are not in phase with their harmonic driving voltages, then the true power (the KW) will be less than the apparent power (the KVA) and the resulting TPF will be lower than 1.00.

If you are monitoring a conventional motor without a VSD (variable speed drive) driving it, you will find that the TPF is a pretty good measurement of the DPF, so talking simply of “power factor” (PF) is pretty accurate and explanatory.  But if you are monitoring an electronic load with high harmonics, there is a good chance that the DPF (the phase lag of the fundamental frequency) is close to 1.00, even if the TPF is much lower.  Therefore, you should know your load before you make assumptions about what the TPF means.

The circuit on the left has no phase lag, but it has high current waveform distortion, resulting in W/VA= 0.93.  The circuit on the right has no harmonic distortion, but it has 22 degrees of phase lag, resulting in W/VA= 0.93.  The voltage and current RMS values are the same in both circuits. The W and VA are also the same, but they represent completely different challenges for mitigation.

If you have high harmonic content, it may not matter.  A desk computer with a low TPF due to harmonics probably makes no difference to your facility.  But if you have 1000 desk computers with low TPF due to harmonics, you likely have substantial harmonic currents flowing through your facility wiring and through the distribution and step-down transformers at your site.  You care about this because harmonic currents have a heating effect that is far greater than currents of the same magnitude at the fundamental frequency.  So you may measure an overall current of 200A and feel safe, but your wiring in the cable trays and walls may be dangerously heated.  Your distribution transformers, if not properly K rated, may be overheating and in a dangerous condition, and there may be hot spots on contacts and connection points.

PowerSight has all the measurements you need to allow you to assess your problems and verify your solutions with regards to power factor.

All models measure and log TPF, the true power factor.  If you are monitoring an inductive load, this gives you a good measurement for the DPF, the displacement power factor, so you can take the proper mitigating measures.  If you are monitoring an electronic load, branch circuit, or service entrance you can get a sense of whether there is a displacement and/or harmonic problem present.

Most models also measure DPF and display readings on the analyzer itself so you can take a direct measurement, either while wearing your PPE with your analyzer in your hand or safely out of the arc flash zone, using the Remote Control feature.  All models allow capturing waveforms and then transforming them into phasor diagrams and harmonic bar charts to directly see the components of displacement and harmonics.  Our PS5000 and PS4550 power quality analyzers (with the AMO option enabled) allow you to also log the maximum, minimum, and average DPF into each log record for great analysis of the DPF as loads change.

All models (with the HAO option enabled) also measure and log the THD of each voltage and each current so it is clear if there is a harmonics issue or not.

How PowerSight Helps You Mitigate Lowered Power Factor Due to Harmonics

All PowerSight analyzers will log the THD of each voltage and current so you can recognize and size the scale of your harmonic problems.  All PowerSight analyzers allow you to capture waveforms at any time and then transform the waveform into a harmonic breakdown of the magnitude of each harmonic frequency, so you can decide if you wish to trap specific frequencies or filter the full range of frequencies.  In addition, the PS5000 and the PS4550 with the AMO option will allow you to log each individual harmonic of each voltage and current so you can see how they vary with the series and parallel loads.  Logging individual harmonics can be beneficial in designing a harmonic trap for a specific harmonic.

When you mitigate, you will be able to verify the effectiveness of the mitigation by examining the log or waveforms.

Of course, if low TPF is the result of both harmonics and current lag, PowerSight will allow you to separate the two causes so you can take the correct mitigation action.

The ReportWriter Wizard of PSM-A can provide summary reports of before and after mitigation.  It can also provide comparison reports where the “before” and “after” are compared directly, with % improvement shown.

If you have suggestions on how to improve our equipment to improve your efficiency or to eliminate a source of error, please share it!  We are dedicated to your success.