A Deep Dive into Phasors 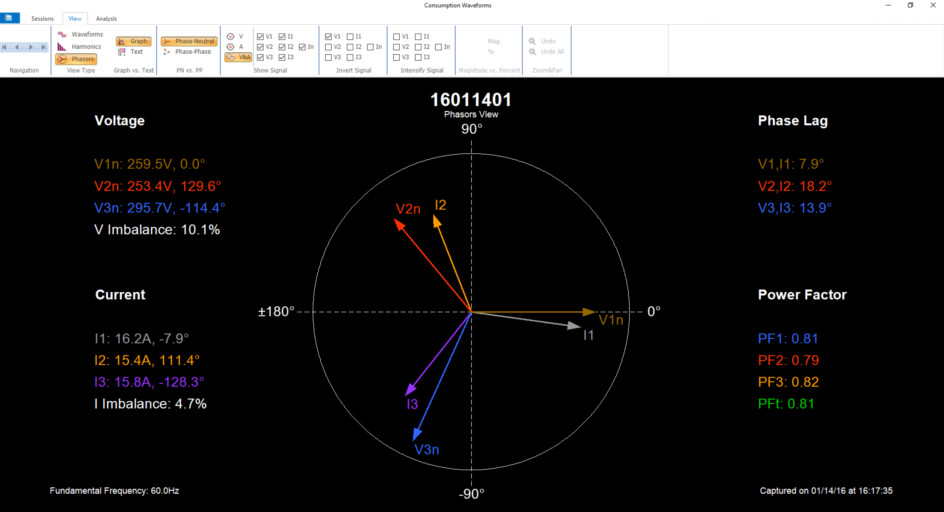 In last month’s blog, we covered the fundamentals of phasor diagrams and how to interpret them at a basic level. In this article, we delve deeper into understanding and analyzing phasors practically, in common scenarios for different power systems.

Phasor diagrams present each voltage and current as a vector on a graph. A vector combines two measurement properties into one object. In this case, the properties are magnitude (of voltage or current) and phase lag.

Normally, phase 1 voltage is considered to be the phase reference signal, so its angle is 0 degrees. If the phase 1 current lags, it will be slightly below it.

Below is a phasor diagram for a typical single-phase 120V/240V system. The voltage sits at 0° as the reference signal, and the current leads 3° ahead of it.

Here is how the waveform of the same system looks. If you look closely, you can see the small 3° lag of the current waveform.

In a split phase system, the optimal angle for V2/I2 is 180°. In this example, the voltages are almost 180° apart, and this time, the phase two current is leading the phase two voltage. The lag/lead for each phase is small, however.

Here is how the split-phase waveform looks in phase-neutral view. The current wave is inverse the voltage, and the voltage tops out at 121.7V.

In phase-phase view, the voltage peaks at 240.6V. The current is hidden in this shot.

In this example, we are glad to see the voltages close to the correct respective angles. If V3 was at 120° (shown as -120° on the diagram) and V2 at 240° (shown as 120° on the diagram), that would indicate a connection error by the person who hooked the analyzer up. However, all the voltages are pretty balanced and the phase sequence is 1-2-3, so the connections were done well.

Here is a look at the phase-neutral waveform, still with only voltages being shown.

Now, let’s add the currents. The phase relationships are somewhat discernable, but there is quite a bit of lag or lead that staggers the currents from the voltages of the same phase.

A phasor diagram clearly shows the phase relationship, however, so we can match the currents to the voltages far easier than on the waveform. They are associated with the correct voltages and are fairly balanced in magnitude, so the connection to the system is good, but there is significant phase lag on each phase. This diagram also shows an alarmingly low power factor on each phase, meaning the motor is idling below its work capacity.

This is a waveform of the same motor, after power factor correction has been made. It is now much easier to discern the phase relationships.

The phasor diagram provides an even clearer view of the currents’ alignment with their respective voltages as a result of the power factor correction. There is still minor phase lag/lead, but the motor is running significantly better than before.

Here is a phase-phase view of the same motor. The currents lag their voltage phasors by about 30° even though the power factor is quite high.

Things can be figured out by examining the relationships of each signal, but at a glance phasor view shows us several things:

First of all, just examining the voltage phasors, it is apparent that the voltage sequence is 3-2-1 rather than the conventional 1-2-3 (traveling clockwise from V1n we first come to V3n, then V2n). The user may have switched two voltages when they connected or it may actually be a 3-2-1 circuit, as for driving a motor backwards.

Now adding the current phasors, it appears that I2 and I3 are backwards. Since I2 and I3 do appear to be associated with V2 and V3 (though reversed), the total power reading will likely be accurate, even though the probes are backwards.

It doesn’t look right, and we can figure it out by identifying the individual signals and their relationships, but look how clear it becomes in phasor view. We see that I2 is lagging V2n but I1 and I3 are the opposite direction of what we would expect them to be. They have been installed backwards.

If we use the “invert” ability of our software, it looks good. There’s a fair amount of phase lag, but the signals align properly with each other. 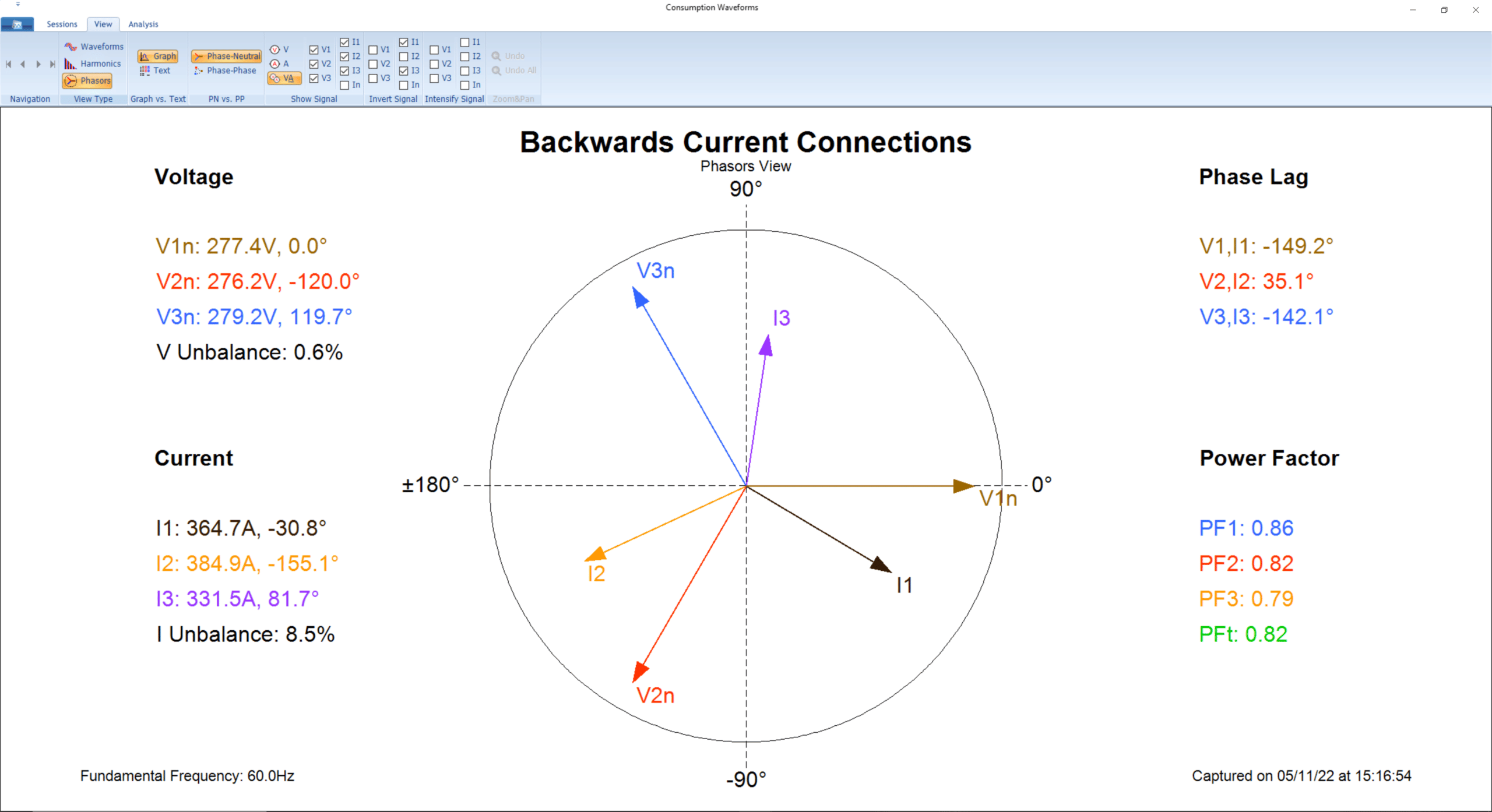 Notice that even though the current probes are backwards, the powers shown in the original waveform are balanced. That’s because the default mode for PowerSight is to assume that all power readings are positive. If the analyzer sees a current probe that is backwards, which results in negative power being measured, the software automatically turns it around and the power readings are all correct, even if the connection was not the correct orientation. If it was a load that alternately generates and consumes power, then we’d operate in “Negative Power Allowed” mode. In that case, a backwards current probe would typically show the measured power to be 1/3 the correct value since one phase was “cancelling” the power of another one.

Waveform is a little jumbled to look at with the currents aligning closely together.

Once again, the phasor view clears it right up.

Notice when viewing phasors as phase-neutral, the currents shift forwards 30°. This gives clear view of the benefit of the VSD. The motor is running with high power factor, currents barely lagging the voltage, regardless of the load.