You are here: Home / Learning / A Dive into Harmonics and Why They Matter

A Dive into Harmonics and Why They Matter 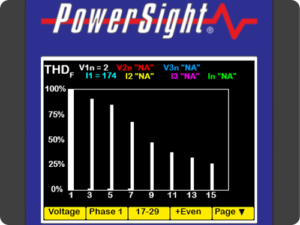 To understand the importance of harmonics, one must be familiar with total harmonic distortion (THD). THD is a measurement of how distorted a wave form is, percentage-wise. High THD is bad news and can result in safety hazards if not addressed. Fortunately, not every kind of equipment is overly sensitive to harmonics. An example of something that may have high THD is energy-efficient lighting, so those powerful bulbs don’t come without risk!

Harmonics are a higher-level measurement and does not need to be measured in every power analysis scenario. Nonetheless, we equip our meters with a wide range of capabilities in order to detect almost all power events. High harmonics create more temperature for the same current. High harmonics paired with high THD can be a safety hazard, with the threat of fires and other heat-related dangers. If huge transformers and conductors overheat, their useful life could be cut short due to premature breakdown induced by high temperatures.

Generally, the goal is to keep THD for voltage under 5%. The third and fifth harmonics are usual suspects for distortion and big problems. A simple solution may be to install a filter that rids of strong harmonics.

Whatever the case may be, PowerSight analyzers can provide all the data necessary to fix an issue with frequency and overheating. Our PS3550, PS4550, and PS5000 all measure harmonics and THD, and the PowerSight Manager – Advanced Software can display these in graphical form or in a data table.