The Cause & Effect of Arc Flash/Blast 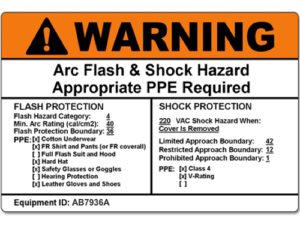 What is Arc Flash and Arc Blast?

An arc flash is a sudden release of energy in the form of current that flows through charged (ionized) air. In person, it looks like an explosion of electrical sparks with pieces of metal, fire, and smoke shooting into the air. Arc flash refers to the light and heat produced by the event, while arc blast is responsible for change in air pressure and sound pressure (the “sonic shockwave”). Often, the arc blast will throw people from the flash as the explosion causes air to rapidly expand.

How Does an Arc Flash/Blast Occur?

An arc flash is triggered by fault currents flowing through conductors that are too close in proximity, along with the ionization of the air. If the air is charged and the conductors are close, the current may jump from one conductor to the other through the air and cause an explosion. Some procedural mistake(s) must be made in order for this to occur in an electrical panel. These mistakes may be one or any combination of:

What Danger does an Arc Flash/Blast Present?

Arc flash and blast are not to be underestimated, for they can do serious damage. Here are some possible implications of the explosion:

How can I Protect Myself?

Whenever you’re working with power, there should be safety standards put in place to prevent foreseeable harm. Always follow safety protocols and do not cut corners, because one mistake could change or end your life. When opening a live electrical panel, always wear PPE and spend as little time in the arc flash/blast range as possible. If not wearing protective equipment, stay away from live electrical panels, or you may be the conductor to which the current jumps to. Use tools that have high safety ratings, like PowerSight analyzers, which can handle up to 15 kV with select probes! And last but not least, use common sense and do not perform questionable tasks.