You are here: Home / Learning / What is Current? 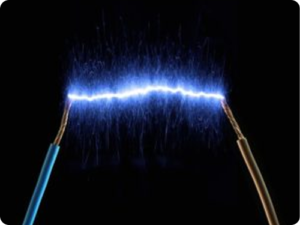 For most of us, we use electricity in many products throughout the day but really don’t know how it works. You probably don’t even think about it that much! You just assume when you flick a switch, the electricity will flow to the item you’re using and it’ll work just fine. Then, one day it doesn’t. Maybe you’re not getting enough juice flowing through or maybe you’re experiencing damaging surges. Especially in a commercial setting, you need to understand why you’re experiencing power and electricity trouble. This means reading a power quality analyzer. It also means understanding some basics about electricity, including the concept of a “current.”

Most electric charge is carried by the electrons and protons within an atom. Protons have a positive charge, while electrons have a negative charge. However, protons are mostly immobilized inside atomic nuclei, so the job of carrying charge from one place to another is handled by electrons. The actual speed of an electron in a wire is about a few million meters per second! Wow!

The electrochemical battery, invented in 1800 by Italian physicist Alessandro Volta, gives off Direct Current (DC). Other DC sources include fuel cells, which combine oxygen and hydrogen into water and produce electrical energy in the process. Oxygen and hydrogen can be supplied as pure gasses or from the air and a chemical fuel such as alcohol. Another source of DC current is the photovoltaic, or solar, cell. In these devices, valuable photonic energy from sunlight is absorbed by electrons and converted into electrical energy.

Most often, we use electricity from an Alternating Current (AC) source. The electricity from the electric power grid is in the form. Generators have rotating coils of wire that pass through magnetic fields as they turn. Since power equals voltage times amperage, you can send more power down the line at the same amperage by using higher voltage. Generators can be powered by steam turbines heated by coal, natural gas, oil or a nuclear reactor, as well as wind turbines, or water turbines in hydroelectric dams.

Once the current gets to the end of the line, most of it is used one of two ways: either to provide heat and light through electrical resistance, or mechanical motion through electrical induction. That’s the electricity you recognize and use every day! This brings us to the most important feature of electric current: it can do work! An AC current lights your office, keep powerful machines moving and even keeps your sandwich cold in the break room fridge.

You need your electricity to move freely and work efficiently. You need your AC currents going strong! But maybe, yours are not right now. If you’re having trouble, a power quality analyzer will tell you exactly what the problem is. It’s time to order a current probe from Power Sight, an industry leader you can trust!